Branded “the anti-CES” by USA Today, Collision has made quite a name for itself in the two short years it has been around. This year, the conference moved from Las Vegas to New Orleans to entertain more than 11,000 attendees in the recently renovated Ernest N. Morial Convention Center and the adjacent Warehouse District. The impressive speaker lineup featured founders of office darlings such as WeWork, Slack and GIPHY; top brass from the likes of General Electric, Samsung and IBM; and Big Freedia. Clearly, it was time for Archer Malmo to size up “America’s fastest growing tech conference,” so we dispatched an inquisitive strategist to the Big Easy to report on the latest in brand thinking, data and technology. Here is the first in a three-part series on his key takeaways from three jam-packed days (and nights) of conferencing.

While few of the many startups represented at Collision will go far without making some bold marketing decisions (Uber being a model, though not necessarily a role model), they would do well to separate actions from words. Several speakers on the conference’s marketing stage – some from big name firms – filled their 20-minute slot with buzzwords and self-promotion, afflictions that plague modern marketing of the inbound and content variety (read Samuel Scott’s excellent article on this topic on TechCrunch).

On the other side of the spectrum, Carl Pei, the 26-year old founder of Chinese smartphone brand OnePlus, is successfully taking on Apple and Samsung by approaching consumers with the same disarming candor he showed on Collision’s main stage. Neil Vogel, CEO of About.com, earned attention for his sales pitch by first explaining how his company had persisted in “failing better,” to no avail. Cal Henderson, the down-to-earth co-founder of Slack, explained how the team communication platform was born as the byproduct from a second failed attempt at developing a MMO video game. In a similarly self-deprecating fashion, Miguel McKelvey, co-founder of WeWork, deadpanned that the secret to the office-sharing startup’s whopping $16 billion valuation (see chart below) is that “we really don’t care about it – at all.”

These speakers demonstrated that bold actions speak for themselves, and that it’s OK to let others learn from your mistakes as well as your successes.

Stay tuned for our second takeaway from Collision: Culture Is King. 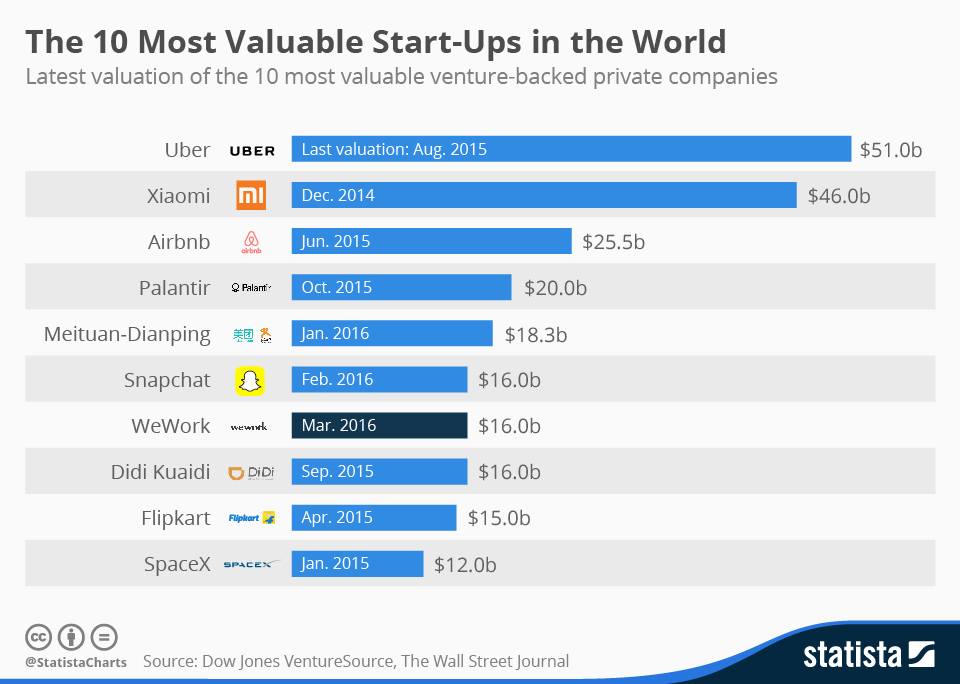 You will find more statistics at Statista.